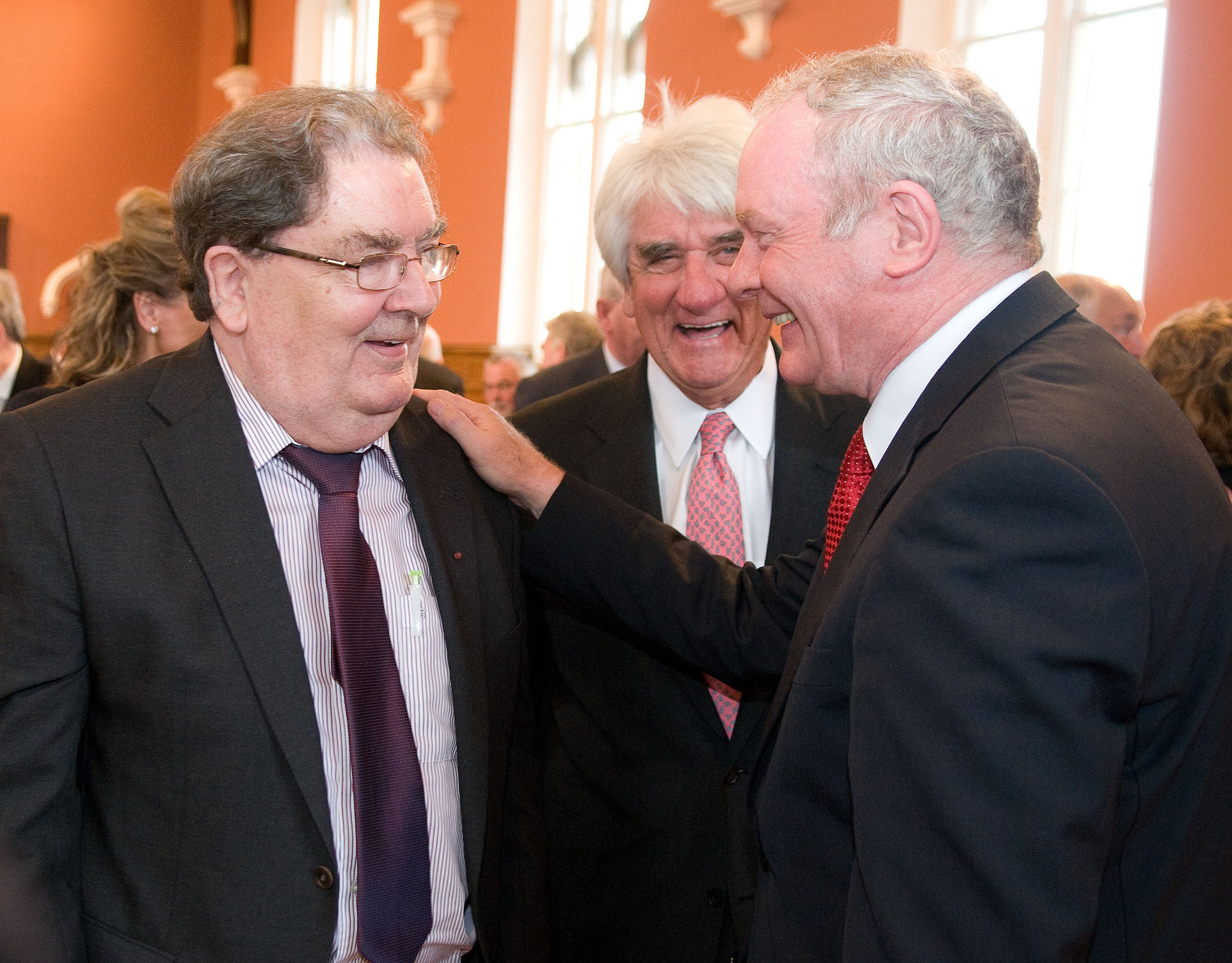 The University of Ulster today announced funding of a further £876,000 for the John Hume and Thomas P. O’Neill Chair in Peace which will be established at the Magee campus.

The Vice-Chancellor Professor Richard Barnett made the announcement at a gala event marking the centenary of Tip O’Neill’s birth and celebrating John Hume’s 75th birthday.

The event, which took place at the Magee campus, was compered by RTE broadcaster and Ulster honorary graduate Dr Miriam O’Callaghan.

Politicians and diplomats including Deputy First Minister Martin McGuinness, US Consul General Gregory Burton, the Tánaiste’s representative Niall Burgess and former Irish Ambassador to the US Dr Sean Donlon, paid tribute to the achievements of John Hume and Thomas P. O’Neill in securing peace in Northern Ireland, and welcomed the plans for the new Chair honouring their work.

Once established, the Chair will form part of a wider initiative building on the work of the International Conflict Research Institute (INCORE) at Magee, which applies lessons from Northern Ireland’s peace process to conflict zones around the world.

The latest donations take the total funds pledged so far to the University for the £3 million endowed Chair in Peace Studies past the £2 million mark.

Addressing an audience of politicians, business leaders, academics and members of the O’Neill and Hume families, Professor Barnett said: “The John Hume and Thomas P. O’Neill Chair in Peace will be a full-time academic position, honouring both men’s significant contributions to peace, and their unique friendship. It will also play a pivotal role in overseeing a new INCORE peace initiative which will train the next generation of peacemakers from around the world.

“The new Chair will build on the success of the original Tip O’Neill Chair, supported by the Ireland Funds, which –  under John Hume’s tenure from 2002 -2009 –  gave the University of Ulster unrivalled visibility on the world stage.

“In addition to recognising Professor Hume and former House of Representatives Speaker Thomas O’Neill, this initiative will mark the legacy of the peace process and the contribution of the many individuals who played a role in securing peace in Northern Ireland.

“The University of Ulster has pioneered work in peacebuilding since the 1970s.  We are deeply proud of the contribution we have made to peace locally and the fact that we are frequently called upon to help build peace all over the world.

“But we know that, given additional capacity, we can do more, much more, both locally and globally and we have ambitious plans to scale the impact of our work.  Building on our global network of peacebuilders and proud heritage of active involvement in peacemaking, this programme will further enhance INCORE’s reputation as a sustainable centre of international excellence in peace and conflict studies.”

In November 2011, the International Fund for Ireland awarded funding of £1m towards the £3 million endowment for the new peace studies Chair.

The announcement today of £876,000, combined with additional monies raised through individual donations, brings the total funds raised to date to £2,011,000.

Professor Barnett said: “The University welcomes this generous funding which will enable us to move forward with this significant academic initiative. We are encouraged by the many private donations in recognition of the tremendous work of John Hume and Thomas P. O’Neill and of INCORE in securing peace in Northern Ireland and assisting peacemaking in other conflict zones around the world.

“Today is a fitting occasion to launch the final stage in this major fundraising drive and we are confident this initiative will be supported in honour of these two great statesmen and their last legacy of peace and reconciliation in Northern Ireland.”

1. The Hume O’Neill Chair will be an endowed, full-time academic position, based on the Magee campus and will oversee a new INCORE Peace Initiative (for which the University is currently fundraising) – an expanded programme of activities will include:

2. INCORE has pioneered practice-based learning on conflict, developed a global network of peacebuilders and built a proud heritage of active involvement in peacemaking.

3. The new INCORE Peace Initiative will build on the success of the original Tip O’Neill Chair, supported by The Ireland Funds, which, under John Hume’s tenure (2002-2009), gave the University incredibly high visibility by attracting an unparalleled group of international figures (for example, Bill Clinton, Hillary Rodham Clinton, Kofi Annan) to the Magee campus to lecture on the subject of peace.