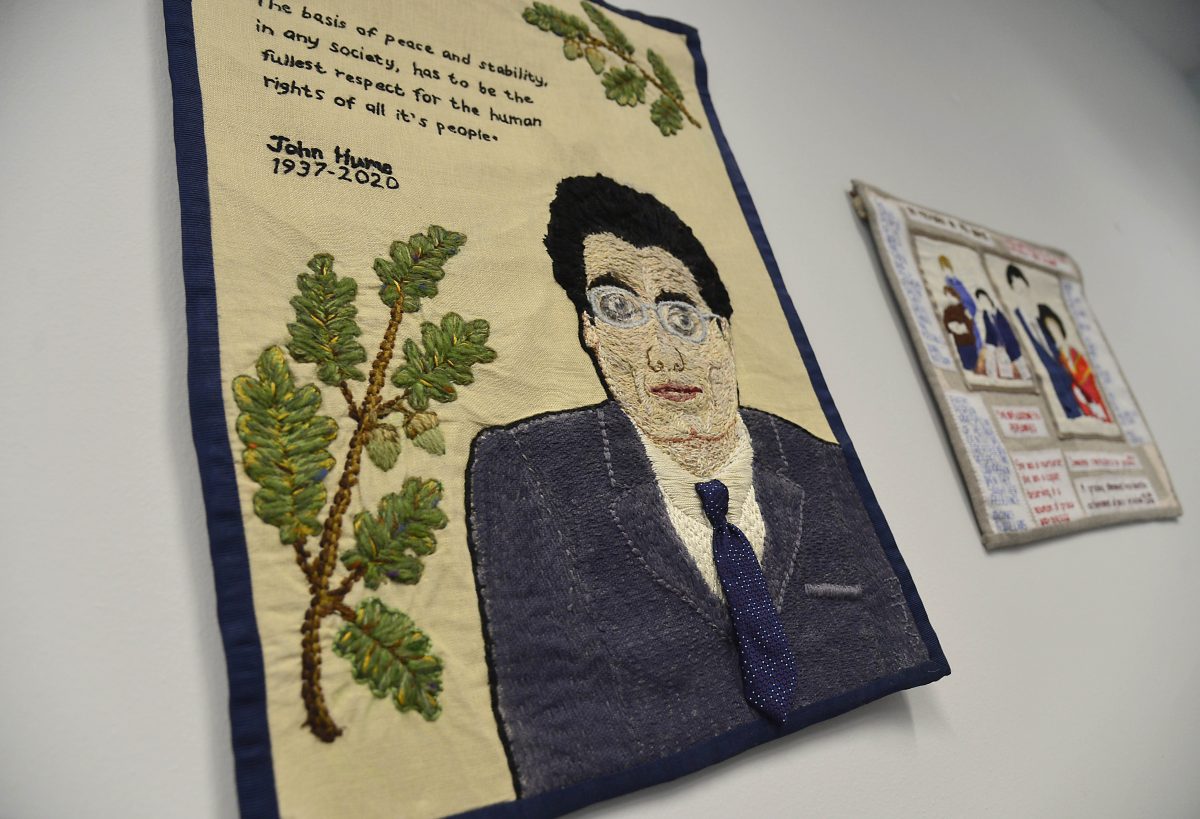 Speaking at the launch of the textile exhibition, Mo Hume, daughter of John and Pat Hume said: “We are honoured that Conflict Textiles and the Hume/O’Neill Chair have commissioned these beautiful pieces in memory of our parents. Before she died, Mum spoke at length to Roberta Bacic, the curator, as she found the work of Conflict Textiles truly inspiring. The fact that they are displayed in the Magee Library where Dad spent so much time and wrote the bulk of his Master’s thesis, is particularly special for us. They both believed passionately in the power of education and were strong supporters of the Magee campus.  We would also like to offer our deep appreciation to Deborah Stockdale and Linda Adams, the textile makers, for their outstanding work.”

The first piece of commemorative textile is entitled John Hume, Peacemaker and was created by Deborah Stockdale. The embroidered portrait represents the multifaceted nature of Derry native John Hume: teacher, Credit Union organiser, civil rights campaigner, nationalist politician and founding member and leader of the Social Democratic and Labour Party (SDLP). To create the piece Deborah had discussions with John’s daughter Mo which helped her to move beyond his public persona and gave her a sense “[of] John, the man and father”. The textile includes one of John’s neckties which was donated by his wife Pat shortly before she passed away on 2 September 2021. Embroidered onto the textile is a quote from John’s Nobel lecture in Oslo in 1998 that reads “The basis of peace and stability, in any society, has to be the fullest respect for the human rights of all its people” along with two oak leaf symbols, to represent his beloved city of Derry. The cluster of five oak leaves signifies his five children who were central in John’s life, influenced from Deborah’s conversations with Mo, and the cluster of six leaves underneath his name represent the six counties of Ulster.

The second piece is entitled Pat Hume and was created by Linda Adams. Following the Chilean arpillera tradition, the piece honours the life and legacy of Pat Hume and features two central images, one of her beside John fully engaging and supporting his work while the second image depicts John and Pat on the day that Pat was conferred with an honorary degree from Ulster University Magee Campus in 2010. Framed around these two images are a multitude of tributes to Pat.

The exhibit also features objects belonging to the couple that were hand-picked by their children.

Roberta Bacic, Conflict Textiles Curator, said “We are honoured to present these two stitched and embroidered portraits of John and Pat to the Hume family, the wider Derry community and beyond. It seems the appropriate time and occasion to celebrate their lives and humanity, close to their birthdays. We wanted to acknowledge John and Pat Hume’s absence via the powerful language of textiles; a language we have developed since 2008. As in their lifelong partnership of over 60 years, John and Pat’s presence will confront us, urging us to build on their work towards sustainable peace

Dr Colin Davidson, Ulster University Chancellor, who was in attendance at the launch commented: “Art of all mediums has a very powerful role to play in remembering and making sense of the past. I was delighted to unveil these latest textiles that pay such a creative tribute to a couple who brought such positive change to the lives of so many people across these islands. The use of textiles is particularly appropriate because the making of art with our hands has an impact that goes beyond the making of the piece. It has been a privilege to attend the Conflict Textiles exhibit and pay tribute to the Hume family. When I look at these pieces of art I see love, hope, commitment, compassion, empathy and that’s everything that sums John and Pat Hume up. It is an honour for Ulster University to modestly continue John’s legacy through our establishment of the John Hume and Thomas P. O’Neill Chair in Peace on the Magee Campus, held by Professor Brandon Hamber who currently engages in peacebuilding work locally and internationally and indeed through our partnership with the John and Pat Hume Foundation which sees us together reach a new generation of youth leaders.”

The exhibit is open to the public from the 28 January 2022 to 28 July 2022 and is located on the First Floor of Ulster University Magee Campus Library, Block MM. Members of the public are advised to follow Ulster University’s current Covid guidelines of wearing face coverings and remaining socially distanced while visiting the exhibit.